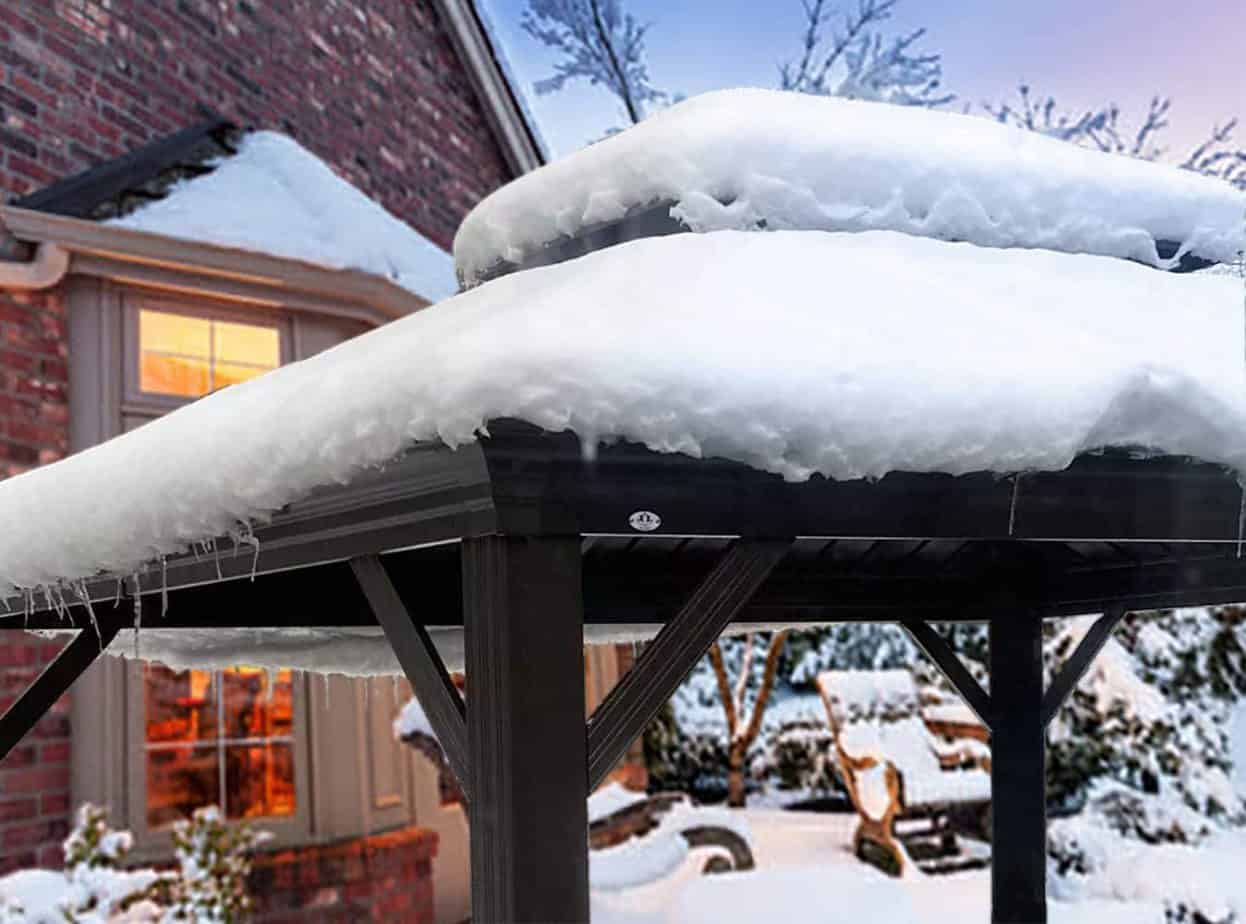 It is very hot where I live here in Las Vegas. To combat some of that heat out on our patio we have a retractable umbrella set up over the patio furniture. While the shade it provides is great, it does get a little bothersome to have to readjust its position to follow the sun.

I have also had to weigh down the umbrella with two 50lb bags of sand because the wind gusts often tumble it over, even though the base it came with is pretty sturdy in its own right. So, in comes the idea of upgrading to a more permanent gazebo to combat all that crazy weather, but what features am I looking for to ensure it can withstand the wind, rain, and occasional snow?

The 4 best gazebo features to withstand wind, rain, and snow are:

Now, let’s go into detail about each of the features. As well as looking at some other available options to look at when deciding on the best gazebo.

The wind can be a very fickle thing. Sometimes it’s calm, maybe a gentle breeze, and other times it can be one of mother nature’s most dangerous designs. I don’t generally have to deal with crazy wind, as in hurricanes or tornadoes, occasionally though we will get some very gusty wind, this is where frame anchors come in.

Usually, frame anchors are small holes on the feet of your gazebo, These holes are used to bolt down the gazebo into many types of foundation. This will tremendously increase the amount of wind resistance that a gazebo has and as long as they are used correctly should alleviate 90% of wind-related accidents and blow-aways.

Tip: If you’ve already got a gazebo or canopy that does have frame anchors another useful way to combat wind is to use guy lines and stakes, the same way you would set up a camping tent. Some very nice stakes and rope can be found here on Amazon.

The Best Way To Anchor Your Gazebo

So there are tons of ways to anchor a gazebo, I’ve included a table of what I believe to be the best way to anchor your gazebo for multiple foundation types.

This is by no means a complete list, and different circumstances could call for different anchor types being used. I will insert my two cents here. Concrete is going to be your best bet when anchoring a gazebo, It will give you the sturdiest anchor point out of all the common patio surfaces.

Tip: Anchoring directly into pavers is never a good idea as you run the risk of cracking the paver, and individual pavers can also be pulled up by the wind.

If you’re already on the step of actually anchoring a gazebo, I have found a really great resource that walks you through a bunch of different anchoring scenarios, here at A Nest With A Yard.

There are 2 main types of gazebos, soft-top roofs, and hard-top roofs. Soft-top roofs are made from all sorts of different types of fabric. This makes the gazebo weigh less. While that is great for portability and sometimes easier installation, it’s not great to combat the elements.

What Are The Advantages Of A Hardtop Roof?

What a hard-top roof gives you that a soft-top gazebo can’t is sturdiness and durability. Because the hard-top weighs more, it is better suited to withstand strong winds and holds its frame anchors better than a soft-top can.

In terms of combating the snow, a hard-top gazebo has a huge advantage over a soft-top gazebo. Referred to by most manufacturers as snow load, the amount of snow that can sit on the roof of a gazebo is measured in lbs and can range from 600 lbs on the low end to upwards of 2500 lbs on the high end with an average of about 1200 – 1500 lbs.

Does A Hardtop Gazebo Rust?

The 2 main materials used for hardtop gazebos are galvanized steel and polycarbonate. Starting with galvanized steel, It will eventually rust. Galvanization is the process of adding a layer of zinc to the steel. The zinc bonds with the steel and creates a barrier to block oxygen and water from reaching the metal underneath. The reason that this steel still rusts is that the zinc barrier can slowly deteriorate.

Gazebos will more often than not come with a special coating to repel UV radiation. Aftermarket coatings are also available to add protection to your gazebo roof.

Whether it be a dual-stack roof or just slits on the top, a vented roof is a very important feature to have for quite a few reasons.

As far as withstanding the weather, the vent is there to allow airflow. The main benefit is that the wind has somewhere to escape and minimized the force put on the roof. This is exactly why you may see patio umbrellas with a similar design, so they don’t blow away.

The vent is also fantastic at reducing heat underneath the gazebo. This is especially true if the gazebo has a galvanized steel roof as I talked about earlier because metal is great at retaining heat. Most of us know that heat rises, and now we are giving it somewhere to escape.

Speaking of escaping, another benefit of a vented roof is that you can put your grill under the gazebo, without the worry of smoke accumulation. In fact, some smaller gazebos are specifically designed to be used as a shelter for grills. You can now grill your favorite foods with shade and shelter from the rain!

So, gutters are good for one thing, directing the rain from the roof, down to the ground in the most efficient way. I will say this is only a must-have feature if you live in a climate with consistent rainfall.

For drier areas like mine, there may be a better use of your money, especially if you find one that ticks all of your other boxes, maybe one that has a higher wind rating, or better anchor points. These gutters can come in a gazebo kit, or found by third-party sellers.

While on the topic of gazebo features, I also wanted to talk about some of the popular, but optional items that gazebos have that can really add to the value and enjoyment you can get from a gazebo.

Mosquito Net – Something you’ll see on many gazebos is a mosquito net. These nets are obviously good to keep pesky mosquitos out of the gazebo.

This is fantastic for people who live near bodies of water, or humid climates. It’s also great for dog owners, where there’s poop, flies will come! Something you may not have thought of is it’s also a good way to keep an eye on the little ones without them scurrying off out of sight.

High Hanging Weight – This is an important feature to consider, especially if you want to hang a TV under the gazebo. While most gazebos have the support to hang light items, string lights, for example, many of them cannot support heavier items like televisions, fans, or multiple speakers.

While the features everyone wants and needs for their gazebo depend on many factors like climate and intended use, the features that are most important are the ones that will shield you from mother natures harshest weather. This allows for the most enjoyment and positive backyard experience for years to come.

How long do hardtop gazebos last?

A hardtop gazebo with an aluminum/steel body can last between 2 to 10 years. Wooden gazebos can last as long as 20 years. The 2 major factors that affect the lifespan of a hardtop gazebo are climate (humidity, heat, rainfall), and proper maintenance and care (cleaning, inspecting, resealing wood).

Hi, I'm Mike. I grew up in North Carolina having a blast on trampolines, go-karts, and just sitting on the porch with my friends. I have since moved to Las Vegas with my wife, 2 children, and 3 dogs. When I'm not chasing the kids around the house, I am probably chasing them around the backyard!

Having a pool on your property brings many benefits, especially on hot, steamy days. If your pool works correctly, you can have years of fun while keeping cool in your yard. However, a pool requires...

Continue Reading
link to Should Your Pool Cover Touch the Water?

It's that dreadful time of year when it's time to close up your pool for the cold months ahead. Proper swimming pool maintenance will help your pool last a long time and create less work when it's...

Welcome to Diehard Backyard. If you're here then you're probably a backyard diehard! My name is Mike and I enjoy writing about things I've learned about my backyard, so kick your feet up and stay a while.

I am a participant in the Amazon Services LLC Associates Program, an affiliate advertising program designed to provide a means for sites to earn advertising fees by advertising and linking to Amazon.com. I am compensated for referring traffic and business to Amazon and other companies linked to on this site.