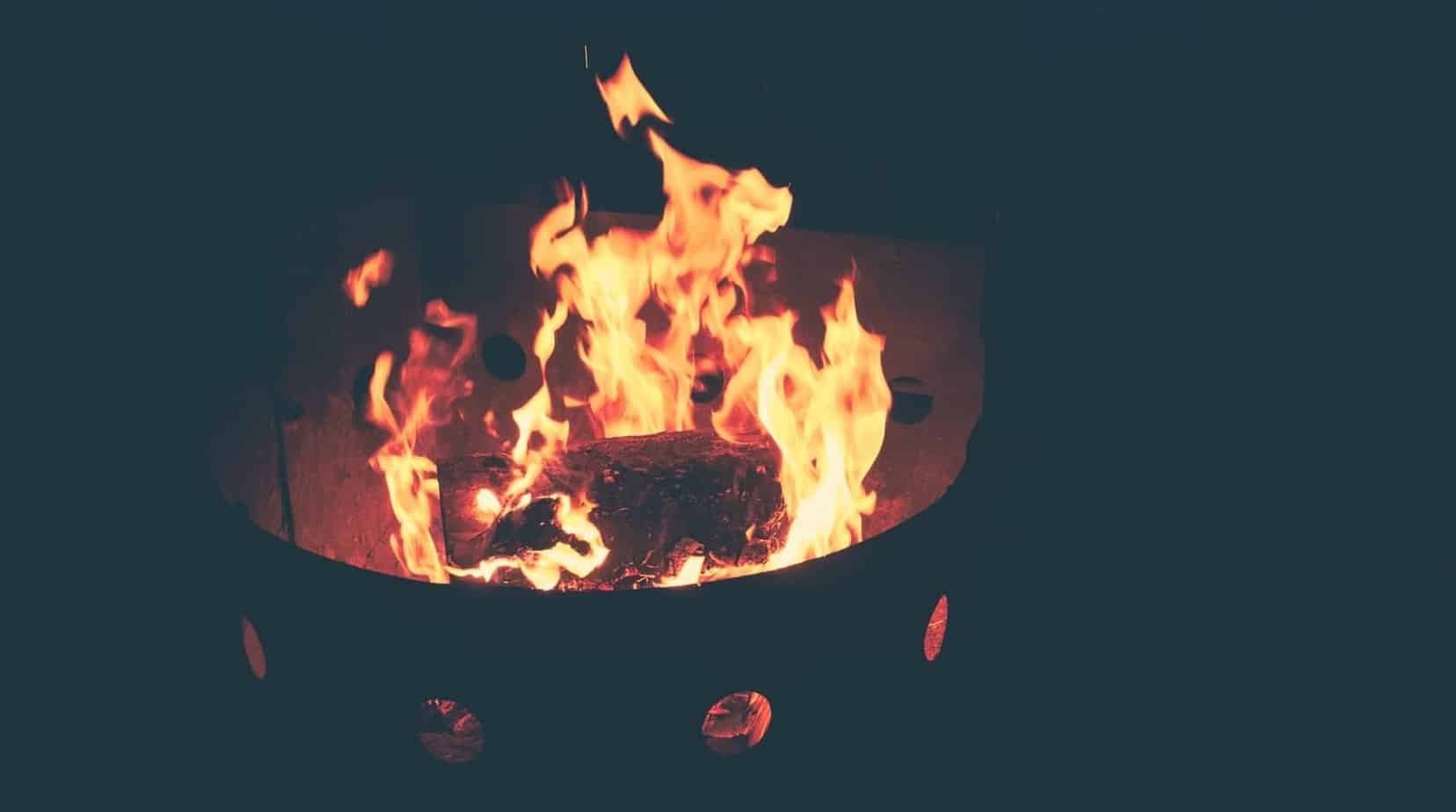 It’s probably happened to you, I know it’s happened to me dozens of times. You’re enjoying the fresh air, the stars, the company and then a whiff of smoke right in your face. It’s alright you can slide your chair over no big deal. Boom, there it is again.

Put simply smoke is formed when there is not enough oxygen to efficiently burn your firewood. The smokeless fire pits you see at your retail stores use a hollow double-wall design. This pulls in air and adds oxygen to the fire, allowing the fuel (you’re firewood) to burn completely, a process called complete combustion. If you want to know some of the science behind complete combustion, I wrote about it here.

The Advantages of Smokeless Fire Pits

Smokeless fire pits have a slew of benefits that make them appealing when compared to to a traditional fire pit. Let’s get this thing goin’!

If you’ve used a traditional fire pit or been in front of the campfire, I am sure you’ve experienced that smoke that always seems to be attracted to you, it seems to follow you no matter where you move. That wind also kicks up embers from the fire which can be dangerous, especially if you have children around that are not aware enough to be on the lookout.

The deep well design of smokeless fire pits is efficient at keeping whirling smoke and embers to a minimum.

Fire pits are generally used in the colder months. The ability to enjoy the outdoors on a chilly day. I crave that fire heat. Luckily, due to the more efficient burning of the wood, smokeless fire pits produce more heat, than their traditional counterpart. They also are able to achieve this heat will a smaller amount of wood.

Because of the airflow management, the heat that it produces is more consistent, so there is much less time keeping that fire alive and making sure it doesn’t get too strong or too weak.

Smokeless Fire Pits Are Better For The Environment

Smokeless fire pits effectively reduce the amount of carbon monoxide and carbon dioxide, which is the by-product of incomplete combustion. Specifically, BioLite’s CampStove touts a 90 percent reduction in carbon emissions.

Wood burning fire pits, even smokeless fire pits still produce particulate pollution into the air, if you are looking for something that does not emit this particulate matter then a natural gas or propane fueled fire pit may be a better option for you.

For more information about outdoor air pollution and the dangers of carbon emissions, here is a well-written article on the subject by the World Health Organization.

Inconspicuous Heat, AKA, Fire? What Fire?

This one is mainly for my city folks. Not having to worry about about smoke is one thing, but not having your neighbors worrying about your smoke, that’s almost as good.

Some neighbors are overly curious or overly cautious about smoke, maybe they want to make sure you’re safe, maybe they are environmentally conscious and do not like the pollution, in either case, they will no longer be notified by the smell nor the smoke that comes from using a fire pit, and they can rest easy knowing you’re being environmentally friendly.

Better For Your Lungs

Basically, less smoke means less smoke to inhale. You are any of your guests that have any unique medical conditions such as pregnancy, asthma, allergies, or sinus or issues will thank you. The National Library of Medicine has a great article regarding the inhalation of fire smoke.

Cleanup Is Less Of A Headache

Cleaning your smokeless fire pit is easier much easier. due to the way the complete combustion makes use of its fuel source (the firewood). The higher temperature burns result in the wood being reduced into a fine ash.

Generally, you can use your smokeless fire pit quite a few times, so long as your burns are contained within a few hours, then all you would need to do is grab a gardening shovel and scoop out the ash (once it has cooled down, of course)

If you use the fire pit for 2-3 hours at a time and then let it burn down afterward, you can use up to 6 times before needing to clean-out the ashes. If you burn it all day, you will need to empty out the coals that build-up at some point because they will take up more space than ashes.

The Disadvantages of Smokeless Fire Pits

Although there are not many disadvantages to smokeless fire pits, there are some that you may consider depending on your use case.

They Are Not Weatherproof

They Are A Bit Pricey

While they are now more affordable than years past, they still are generally more expensive than a traditional wood-burning fire pit. Depending on the features and accessories added smokeless fire pits can range from about $200 to $1500 according to my quick google search.

The Dakota fire pit ( or Dakota fire hole) can be traced back to the native peoples of the Dakota, Lakota, and Nakota Sioux Nations. These nomadic tribes were constantly on the move following bison herds around the plains of the mid west. They needed a resilient, easy-to-maintain fire that wouldn’t alert the bison herds, thus the Dakota fire pit was invented. Here’s how to create this simple but powerful fire.

That’s it. No, really! The fire from your main hole will be shielded from the wind. The fire creates airflow from the secondary tunnel bringing fresh oxygen into your fire. You guessed it, more oxygen = less smoke! The holes are shallow enough that the use of a thick stick is viable, or a shovel if you have one handy. These are such a good design, the American military still teaches this technique to some of their troops.

These aren’t dummy proof though. The right wood and the right set-up are key to a good Dakota fire pit. Be sure to use firewood with low moisture content and stack them loose for optimal air flow. For more tips, visit my post about how smokeless fire pits actually work, it’s got lots of tips in order to the best smokeless experience you can from your fire pit.

Given the abundant amount benefits that smokeless fire pits can give you. I would say they are well worth the investment if you plan on using it more that occasionally. Keep in mind the Dakota fire pit gives you all the benefits that a consumer fire pit does without costing a dime. Still, some people cannot or do not want to dig a few holes in their yard, and for these people.

How much heat does a smokeless fire pit create?

Smokeless fire pits can get just as hot, if not hotter than their traditional counterparts. The double-wall design allows for complete combustion, which burns the firewood more efficiently, this creates more light and more heat.

I personally would not use my smokeless fire pit indoors. while the amount of smoke is minimal it is still there. I am not entirely comfortable with the idea of the particles emitted from the fire pit, especially around my kids. That being said, there are fire pits specifically made for indoor use. Ventilation and safety are key here.

Hi, I'm Mike. I grew up in North Carolina having a blast on trampolines, go-karts, and just sitting on the porch with my friends. I have since moved to Las Vegas with my wife, 2 children, and 3 dogs. When I'm not chasing the kids around the house, I am probably chasing them around the backyard!

link to Is A Smokeless Fire Pit Really Smokeless? – How It Works

As the weather gets warmer, I find myself spending more and more time outside, Taking in the sun and relaxing by the pool. I also enjoy watching TV. It's not only entertainment, it is a bonding...

Welcome to Diehard Backyard. If you're here then you're probably a backyard diehard! My name is Mike and I enjoy writing about things I've learned about my backyard, so kick your feet up and stay a while.

I am a participant in the Amazon Services LLC Associates Program, an affiliate advertising program designed to provide a means for sites to earn advertising fees by advertising and linking to Amazon.com. I am compensated for referring traffic and business to Amazon and other companies linked to on this site.